We want to thank the team members of the Friends of Irish Research for their work in compiling the data with special thanks going to Phyllis Knopf for volunteering to enter so much of the data to make it possible for the work started in 1993 to be available for all to search.

The information on this page has been available for a number of years at http://tiara.ie/Canton.php. The content of this page and the above linked database is held by including the full transcription of the gravestones at Old St. Mary's Cemetery is held by:

This Alphabetical Index to the surnames inscribed on the gravestones of Old St. Mary's Cemetery, at the corner of Washington and Randolph Streets in Canton, Massachusetts requires some definition.

The first seven entries are without Surnames. The remainder list all surnames engraved in this cemetery at the time of the survey. All spellings were as engraved. As all family researchers eventually realize, many factors impact the spellings used by individuals and recorders over time, and researchers must seek out all spelling variations to avoid missing the object of their search.

In this Index, each surname is followed by a Range number to approximately locate the gravestone location. If more than one gravestone in a Range includes the same surname, that is shown immediately adjacent to the surname in brackets, ie., "ANDREWS (2) 3A" displays the surname ANDREWS which appears on 2 stones in Range 3A.

Also, following the Range number, a code is provided where appropriate, to indicate certain pertinent additional information about the specified surname. In the cited case of ANDREWS, the code letters of "N" and "M" indicate that the grave site includes information on Nativity and of Military service.

The codes used are as follows: 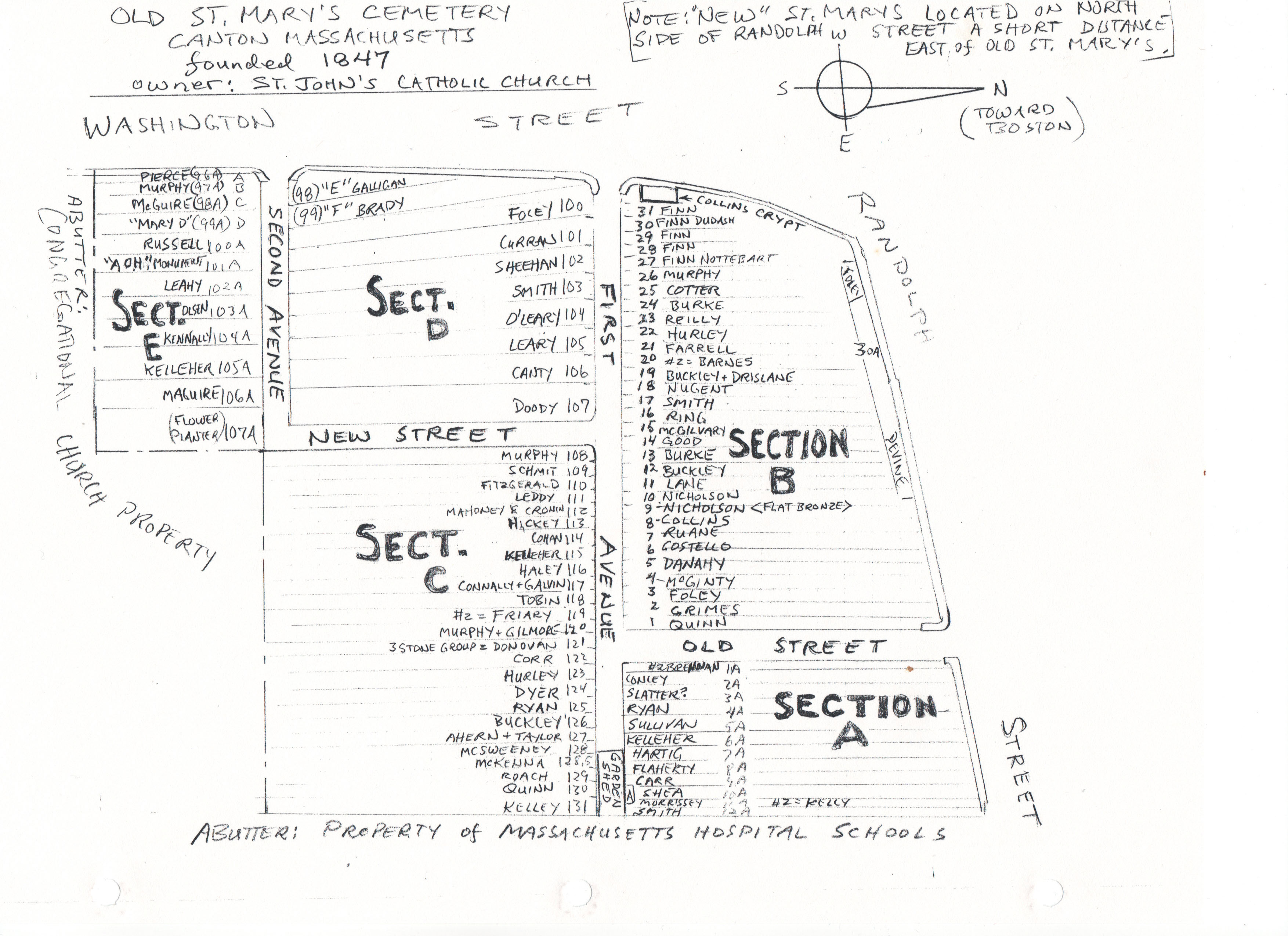 The following sketch-map is not to scale, but it approximates the layout and the range identities of the official map available at the custodian offices, St. John the Evangelist Catholic Church, 700 Washington Street. Canton, Massachusetts 02021.

To simplify locating gravestones, the author has assigned "street names" and Section Identity not shown on the official map. The sections are labeled "A" through "E", from the oldest, eastern most section to the newest southernmost section. The chosen street names start with "Old Street", which exits the cemetery at Randolph Street and abuts the oldest section. "First Avenue" exits the cemetery at the intersection of Randolph and Washington Streets, and separates Sections "A"&"B" on the north from Sections "C"&"D" on the south. "Second Avenue" is the final exit from the cemetery, (parallel to and south of First Avenue) on Washington Street. "New Street" joins First and Second Avenues and separates Sections C and D.

The author has also labeled each range in a slightly modified way from the original official map. In what has been identified as Section "A", the oldest section, the official map provides no range identification. This author has assigned ranges 1A through 12A to those ranges. In the section identified as Section "B" (which is distinguished by the presence of the only mausoleum in the cemetery, the Collins Tomb), a second structure shown on the official map has since been removed. What was formerly known as the "Receiving Tomb" (immediately behind the Collins Tomb), has been eliminated and is now marked by approximately 5 additional ranges of graves. This author has identified them as ranges 27 through 31. Also, the single graves in Section B along the granite wall at Randolph Street have now been identified as Range 30A. Section "C" is identical to the official map.

In Section "D", the two ranges nearest Washington Street on the official map are not identified as ranges but as clusters of plots known as lots "A" through "N". The author has identified them as ranges "E" and "F". That is consistent with the first four ranges in Section "E", nearest Washington Street, labeled as Ranges "A" through "D" by both the official map and this author.

The final range modification made by this author is the remainder of Section "E" shown on the official map as R 100 through R107. I have chosen instead to use Range 100A through 107A.

The stones in each range are as they were counted by a corps of volunteers in September, 1993. The position on that date is counted from the beginning of the row. Any subsequent (new) stones placed of course would disrupt the count. Therefore, all counts are approximate, but will aid in the locating to a nearby position. To start the count, all ranges in Section A, B, C, and ranges 100 through 107 in Section D begin at the First Avenue end of the range. (Excepting Range 30A in Section B, which runs along the stone wall along Randolph Street and begins near Range 30 at its west end.)